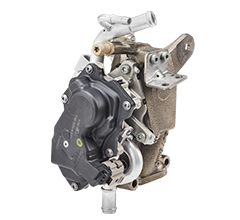 What are EGR systems?

Exhaust Gas Recirculation (EGR) is an efficient, cost effective system for reducing automotive nitrogen oxide (NOx) emissions. The high-pressure EGR loop collects part of the exhaust gases at the cylinder head outlet and re-injects them into the engine air intake. The main benefit is that NOx is reduced at the source by limiting the quantity produced during the combustion process, rather than by post-treating the exhaust gases.

Original Equipment EGR for the aftermarket

What is an EGR valve?

An EGR valve is one of the main components in the EGR system, used to help control emissions. The EGR valve collects part of the exhaust gases and re-injects them into the engine air intake in order to decrease pollution generated by combustion engines (NOx). The EGR valve is mounted on a channel between exhaust and inlet manifolds.

What is an air intake throttle?

What is an EGR cooler?

An EGR cooler, or EGR exchanger, cools the exhaust gases before they are reintroduced into the engine. By cooling the gases, the EGR cooler improves EGR efficiency. EGR cooler is located on EGR channel and can be  by-passed during the cold start phase.

What is an EGR module?

An EGR module is a combination of several EGR elements that can be mixed together as follows:

Subscribe to Valeo Service newsletter to receive exclusive offers and the latest news on your products and services.

By signing up your email address above, you agree to receive electronically our commercial offers. You can unsubscribe at any time by changing your settings on your account and through unsubscribe links.